DEV-C++ is a fully-featured integrated development environment (IDE) for creating, debugging and creating applications written in a popular C++ programming language. Even though tools for the development of C++ software have undergone countless upgrades over the years, a large number of developers located all around the world have expressed a wish to continue using DEV-C++. This IDE platform has proven itself as highly reliable and intuitive, giving developers access to all of their necessary tools, in-depth debugging, and most importantly, a stable error-free environment for the development of apps of all sizes – from small school tasks to large business projects intended for both internal and public use.
The app is an open-source IDE environment, offering software solutions and the necessary tools for C++ app development. However, be aware that its toolset is focused more on novices and basic programming, and that open source community has not updated its toolset for a considerable time. Still, what is present in its latest version represents a highly-capable C++ IDE that could be used for years without encountering any issue.

If you are a novice, are a student who wants to create C++ project in a stable and easy to use software environment, or even if you are a seasoned programmer who wants to access C++ programming inside small IDE that will not strain your computer resources, DEV-C++ represents a perfect choice. It has all the required tools and feature sets for creating small to mid-sized apps.
It runs on all modern versions of Windows and can be used without any restrictions for free. It was originally developed as an open-source fork of the Bloodshed Dev-C++ IDE.
Installation and Use

Even though DEV-C++ is filled with advanced compiler, debugger and a wide array of dev tools, it’s installation package is quite small (only around 50 MB) and therefore can be easily installed on any modern Windows PC or laptop. Just follow the onscreen instructions, and in mere seconds DEV C plus plus will be ready for running. Other more developed modern IDE environments, on the other hand, require much more storage space, and their installation can run for minutes.
Once up and running, you will be welcomed in a user-friendly interface that can be additionally customized to better fit your needs. The main window of the app follows the basic structure of many other modern IDE environments, with top row of dropdown menus and buttons that are shortcuts to its many built-in tools, a large vertical three-tabbed area for managing Projects, Classes and Debug listings, and of course, the main project area (with support for tabs) where you can start programming your apps. Both the app and the current project can be customized extensively. App Options window features tabs for Genera, Fonts, Colors, Code Insertion, Class Browsing, and Autosave customizations. Environment Options feature tabs for General, Directories, External Programs, File Associations, and CVS support customization. 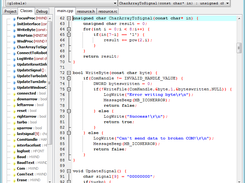