MONARK captures the pure organic sound of the undisputed king of monophonic analog synthesizers. Years of meticulous research capture every nuance of the synth at the center of four decades of popular music. The first choice for bass and lead sounds from electronic and hip hop to indie rock and beyond, no other synth comes close to this combination of power, richness, and musical tone. Delivering the true sound of a synth as famous as the artists who used it, MONARK is the holy grail of analog modeling. MONARK runs in REAKTOR PLAYER or the full REAKTOR 5 version, and is also optimized for easy browsing from the MASCHINE hardware.

The Minimoog is not exactly short of software tributes. How does NI's measure up?

Just because something's been done before doesn't mean it can't be improved upon, as anyone who sat through Ralph Bakshi's 1978 film of Lord Of The Rings will testify. So yes, we've seen countless software Minimoogs already, each edging gradually closer to the sound of the real deal. Oddly enough, one of the most convincing wasn't even specifically a Minimoog, it just copied key sections such as the oscillators, envelopes and filter. Now the time and technology are ripe for Native Instruments to have a crack, although their web site and manual deliberately omit the words 'Moog' or 'Minimoog', preferring 'king of monophonic analog synths' instead.

Monark is not a stand‑alone virtual instrument, but runs either within Reaktor 5 or the free Reaktor 5 Player. It's steadfastly monophonic and steers well clear of the extras sometimes added to a Mini by enterprising technicians (or crazy wreckers, depending on your point of view). Whether or not you have a Moog‑sized gap in your virtual studio, Monark offers a fascinating glimpse into the ongoing exercise to analyse and replicate the subtle behaviour of classic 40-year-old electronics.

The Return Of The King

Having activated Monark via the Native Instruments Service Centre, you click Reaktor's Player button and locate it in the browser. Having dragged the Monark ensemble into the main screen you can feast your eyes on the grey panel with its grey knobs (what's the universal fascination with grey these days?).

Grey or not, Monark is one of the more visually distinctive Minimoog impersonators. Although its layout corresponds to the Mini's, there's only a passing attempt to copy the style, which seemed odd but also in keeping with the nod‑and‑wink presentation. There are a few other differences between Monark and Minimoog panels, mostly due to extra switches or knobs with values cleared away, which doesn't help those of us doing A/B tests.

Another oddity is the fact that Monark isn't a virtual instrument in its own right, but relies on Reaktor. Therefore, if you don't own the full version and have to rely on the 'Player' instead, you can't save snapshots (ie. patches) and build your own banks. Fortunately, this is a famously easy synth to tweak, and as every tweak is stored in your DAW, it's arguably faster to dial up something new each time anyway.

Monark is designed for a sample rate of 88.2/96kHz, which should be set automatically in Reaktor. It's possible to override this manually, but you're strongly advised not to do so to avoid aliasing and other obvious artifacts. I had no performance issues at all and felt no need to explore lower rates.

From the first notes I played, it was obvious that Monark has had a great deal of attention lavished upon it. Indeed, for a few moments after start‑up, I'd swear it was slightly out of tune! One of the special joys of the Minimoog is in how the oscillators never perfectly lock together, and since it felt more natural to adjust tuning with knobs rather than a mouse, I drafted in the controls on my master keyboard, aiming for a comparable level of subtlety. Inevitably, this idea was doomed, but with further experimentation I realised that fine resolution is obtained by using the mouse and shift key together.

That nit‑picking aside, these are full, rich and vibrant oscillators and an order of magnitude more alive than previous software Minis I've tried. Continuing with the 'attention to detail' theme, each oscillator isn't merely a replication of the others; its waveforms have subtly different harmonic content. Even the triangle has genuine presence, which isn't always the case for modelled oscillators.

Continuing in time‑honoured fashion, the filter is a smooth and deep delight. Like U‑he's Diva beforehand, Zero‑Delay Feedback technology is employed, aided by careful listening then further fine‑tuning. The result is a particularly natural‑sounding resonance and one of the best modelled filters I've ever heard. Next, because this is a Minimoog, I instantly looked for a way to feed external signals into the filter but, amazingly, this key feature has been omitted! Instead, the mixer has a Feedback control in place of the Mini's external input. This provides a positive feedback in two flavours (A and B), with the first closest to the effect of routing the Mini's headphone output back in again. Feedback is quite brash and aggressive at its extremes, with its second setting providing a more subtle variation.

The mixer's Load control is an extra knob and it has appropriated the lamp associated in the Mini with external signals. Here, the control is used to drive the levels of the oscillators (and noise) harder than they ordinarily would before hitting the filter. It's a pretty convincing overdrive and at high levels the lamp lights in a welcome flash of nostalgia.

If the Load control was a minor departure, there's a whopper to come. You can swap out that wonderful, warm distinctive filter and replace it with a 12dB or 6dB low‑pass version or even a 12dB band‑pass filter. They sound pretty good — especially the band‑pass — but are easily ignored by purists seeking only Minimoog tones. Native Instruments have also copied the filtering that takes place when noise is used as a modulation source; white becoming pink, pink turning red. With a dose of red-noise modulation and the filter set to self‑oscillate, you can enjoy all those 'cosmic storm' sound effects of the '70s. 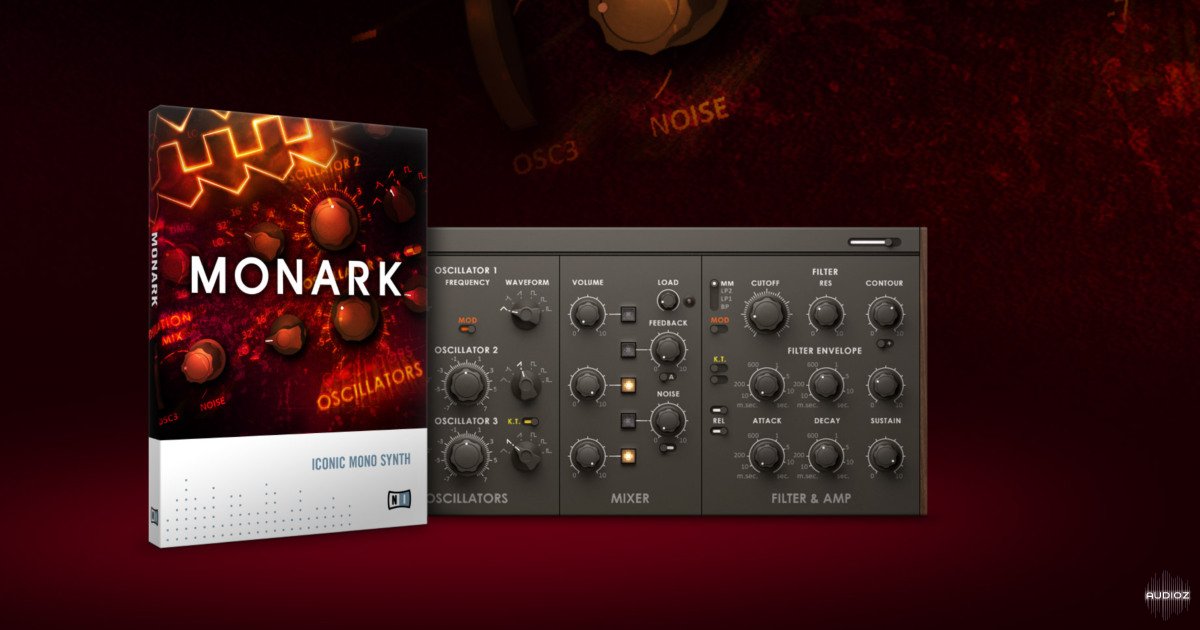 Of the other extras, there's negative filter-envelope modulation and a choice between the Minimoog's constant rate glide ('MM' setting) or 'Silver'. Switch to the latter and glide takes the same time regardless of the distance between notes. A further enhancement is 'legato' glide, where glide is only present in notes played with overlap.

I'm happy to report the envelopes work as they should. Actually, I can't resist copying a short section from the manual in case it assists other developers still hopelessly baffled: 'The envelopes always continue from their current internal state. So, if you retrigger the envelope during a long release they do not jump to an initial value to start off the attack phase but continue smoothly from the current state.” This is important because, with no sensitivity to velocity, the accumulation effect of a properly modelled analogue envelope is vital for controlling level and adding a degree of expression.

If that were all, I'd be checking the bottom line and starting on a positive conclusion. But Monark includes an intriguing rear panel: the General section. This permits a level of personalisation all‑too‑rarely seen on modelled instruments, in which you can harmlessly experiment with many of the issues Mini owners contend with. These include oscillator leakage and pitch drift, scaling inconsistencies and differences in tuning between octaves. Of particular value is the ability to adjust the minimum and maximum rate of VCO3 when it's being used as a modulation source. You're also free to tweak the response of the modulation wheel, giving greater control over the mid‑range of its travel and therefore curbing the excesses so easily introduced on the real thing.

A rare degree of customisation is available via Monark's rear panel.There are three different Minimoog settings; from clean and well‑maintained, to rather less perfect. Each may be fine‑tuned to taste, ready to personalise your machine at the click of a mouse. You can even deviate from the Mini's regular low-note priority, which is handy sometimes if your playing technique (like mine) is more Schulze than Wakeman. While you can't deviate very far from a musically playable Minimoog, or hack in and add an extra LFO or PWM, I thought these tools were genuinely useful for adding uniqueness to your copy of Monark.

There can't be many Sound On Sound readers unaware of the Minimoog and its enduring influence and sounds. I began the review doing comparisons with a friend's Mini, but by the end I'd succumbed and, some 20 years after selling my own Model D, bought another. This therefore counts as the most expensive review I've ever written!

If you don't have an understanding partner (and savings to plunder), Native Instruments have just the thing, and for less than £100. Monark sounds closer to a Minimoog than I've heard in software. While there were differences — most obviously when it came to maxing out resonance, overdrive and audio‑level modulation — in blind auditions I doubt even experienced players would pick out Monark reliably. I was slightly disappointed to find no external input and would have preferred a stand‑alone instrument rather than using Reaktor, but neither issue is too serious given the quality of the emulation.

There's been no attempt to fill out the feature set with pulse-width modulation, oscillator sync or even polyphony. Instead Native Instruments concentrate on doing 'the king' proud, even going to the lengths of adding user control over imperfections and edging ever closer to the unique behaviour of each Minimoog. After all, even taking into account the variations in design from the very first 'R.A. Moog' Minis to the final run, you'll never get two that sound and behave identically. If you're still wondering whether the world needs another software Minimoog, based on this evidence I'd have a say the answer is a resounding yes.

During the review I was able to compare Monark to a friend's Minimoog (its serial in the 8000 range) — insofar as you can compare a warm and substantial chunk of electronics to a virtual counterpart. I didn't expect identical settings to produce identical results, nor did I analyse each waveform. Instead I programmed my favourite Minimoog sounds on both, not caring that the knob positions often needed to be a few degrees (or more) out. I then swapped between each, recording the performances. Later, in almost all cases, the biggest clue to the real one's identity was not the raw sound, but the background noise I'd failed to eliminate. All my favourite Moog bass, solo and 'weird' patches were achievable and thoroughly believable. The low end and envelope punch were particularly impressive and even the feedback came reasonably close to the sound of an overdriven Mini.

Native Instruments have created the most authentic‑sounding software Minimoog to date, sticking closely to the limitations and strengths of this legendary instrument.